Strengthen Your Immune System with TCM

It’s that time of year again…the weather is getting colder, the leaves have fallen off the trees and people are beginning to trickle into the office with autumn colds and allergies. As an acupuncturist, I have to say I rarely get sick. I have lots of tools and tricks in my bag to stay healthy during cold season, and I’m happy to share some of them with you!

You know how your mom always made you wear a scarf when you were a kid, telling you that you’d catch a cold if you didn’t? I used to think that she was just saying that, but as it turns out, there was something to it after all! In the world of Chinese medicine, there is an area at the back of the neck which can absorb wind and cold, allowing it to permeate into your system and creating an ideal situation to catch an actual cold. By keeping this area warm and covered, you are putting up a shield between yourself and this invading wind, increasing your chances of avoiding colds.

Since we acupuncturists view cold as an entity that can migrate into your system, adding warm foods into your diet can help to balance out that cold, keeping you healthy or speeding up your recovery once a cold has set in. Eating chicken soup to ward off illness isn’t just a fallacy; the temperature of the soup is helpful, but there are also lots of “warm” ingredients within the soup. Every food has an energetic quality, and warm spicy foods balance out excess cold in the system. Most good chicken soup has garlic, pepper and other spices that are considered “warm” in TCM.

Adding spicy foods into your diet when cold season hits is a way to protect yourself from succumbing to the sniffles. Whenever I begin to feel a cold coming on, I sautee slices of ginger with a little butter or oil, and add it to a tea made with lemon, honey, cinnamon, clove and a dash of cayenne. I let the ginger soften as I drink the tea, and then eat the ginger. This never fails to get me feeling healthy again, if I drink it before the cold settles into my system. It’s also delicious!

Staying warm and eating the right foods are two ways to stay healthy, and another is acupuncture. If you don’t have access to your acupuncturist, the next best thing is to utilize some acupressure points to crank up your immune system. If you slide your finger down the side of your thumb, you will hit a bone just below the wrist crease. Keep sliding down about an inch or so, and press hard while feeling for a tender spot. This is Lung 7, which is a powerful point to build up the energy of the lung, which boosts the immunity. Another great immunity point is Stomach 36. This point is located approximately four fingers down from the bottom of the knee cap, along the outer boundary of the shin bone. This point boosts the energy of the entire body, so massaging it will help to keep your “Wei Qi” up. This Wei Qi is your defensive energy, which creates a barrier between yourself and pathogens that cause harm. In Western terminology, it would be the equivalent of the immune system.  Pressing on both of these points will allow you to tap into the positive effects of acupuncture, minus the needles. 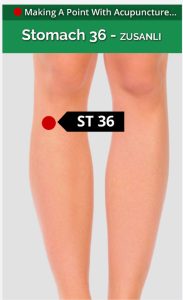 Stomach 36 can easily be said to be the number one acupuncture point in the body. This point
is named Zu San Li in Chinese, which can be translated to mean leg three measure. This name describes its location below the knee on the outer side of the shin bone. Other alternative names for this influential point are Lower Sea of Qi, Ghost Evil and Lower Mound.
Although it is located on the leg, this point is the command point of the abdomen. Because of this function, Stomach 36 can be used for all digestive problems, including constipation, food stagnation, stomach pain, diarrhea, indigestion, vomiting, hiccups and gastroenteritis.
The spleen and stomach organs in Chinese medicine are the source of post-natal Qi, this Qi which is acquired after we are born. Because of this, Stomach 36 is a very tonifying and energy-building point. It can help with weakness and dizziness, as well as promoting longevity, especially when combined with moxibustion (the burning of the herb moxa on acupuncture points). Wei Qi is the defensive Qi in the body and can likened to the immune system and Stomach 36 can help build Wei Qi to defend against illness.
Locally, Stomach 36 can be used for edema and swelling in the leg, pain in the leg, atrophy
of the lower limbs, varicose veins and just promoting good circulation. Stomach 36 helps pass urinary and gall stones, promotes lactation, reduces hypertension and helps with difficult urination and incontinence.

This article was posted in Acupuncture, Blog, Traditional Chinese Medicine. Bookmark the permalink. Follow comments with the RSS feed for this post. Both comments and trackbacks are closed.
2187243400 Directions Contact/Schedule